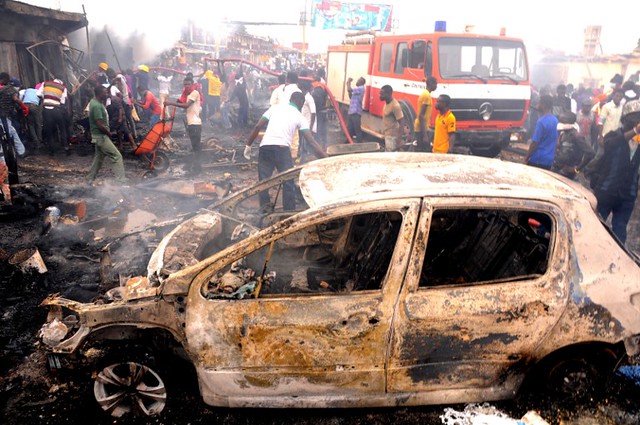 While the world is reeling from the horrible terrorist attacks that ISIS has launched in Europe, an equally evil terrorist organization, which is also fighting to establish an Islamic State, has hardly received any media notice.  Nigeria-based Boko Haram is spreading terror across West Africa.  Last year they killed more people than ISIS did, slaughtering well over 6000 civilians, bringing the total civilian deaths to over 17,000 since 2009.

Their tactics have included car bombs, strapping suicide vests to kidnapped children, some as young as 10 years old, as well as formal beheadings and other forms of public execution.

Nearly two and a half million human beings have been displaced, and many thousands of women and girls have been kidnapped. The kidnapping of  274 girls from their school in 2014 made some US press briefly. You may remember the #BringBackOurGirls campaign on Twitter. These children have been raped, impregnated, forced into marriages with Boko Haram terrorists, sold into slavery, and even forced into suicide vests and sent into public markets and transportation hubs.  A few dozen have escaped.  But the fate of most of them remains unknown.

Can you imagine if 274 girls were kidnapped from their schools in Belgium?  Or France?  Or any city or suburb or small town in the US?  Can you imagine if there were thousands of other kidnappings, happening almost every week?  Can you imagine?  You know in your heart that if these horrible crimes were being committed against white girls and white women, the news of these horrors would dominate the press.

But even amazing victories in the region are going ignored.

On Thursday, March 24, just two days after the terrible attacks in Belgium, the Nigerian military reported that it had freed 800 hostages in a sweeping operation.  The Borno state was the focus of the efforts, and in the Kusumma village alone, 520 hostages were rescued.  It is not known if any of the kidnapped school girls from Chibok were among the rescued.

This is huge.  This should be the top story in the world today.

If you google it, you will find a few stories.  The Guardian broke the story yesterday.  You can read about it here.  [otw_shortcode_button href=”http://www.theguardian.com/world/2016/mar/25/boko-haram-hostages-rescued-nigerian-army” size=”medium” icon_position=”left” shape=”square”]More than 800 Boko Haram hostages rescued by Nigerian army[/otw_shortcode_button]  NPR is reporting it today, along with a handful of other news sources.

The Bible on the Beach

KCinJH - April 20, 2017
0
Street photographer, Bruce Armstrong, has spent more than a decade photographing the metal, the movement, and the people of the majestic 7 train. Traversing...

The United Failure of America

Why You Need to See the Queen of Katwe

Do You Know Who Cleaned Up Ground Zero After 9/11?

Those Who Disappeared After 9/11

ABOUT US
Newspaper is your news, entertainment, music fashion website. We provide you with the latest breaking news and videos straight from the entertainment industry.
Contact us: contact@yoursite.com
FOLLOW US
© Newspaper WordPress Theme by TagDiv
MORE STORIES

12 Things You NEED To KNOW About the 2000 Elections